The Heart of a Woman

On Saturday, I opened my jewelry box, took out a button and attached it to my coat. 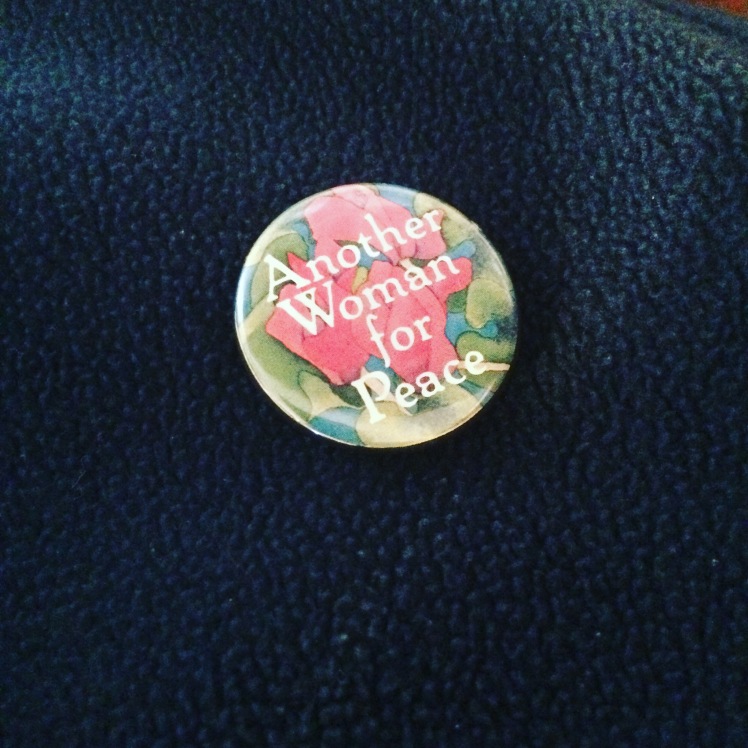 I had gotten this button on a street in Washington DC in 2003, when I was 19 and protesting the invasion of Iraq, an occupation we are still wasting blood and money on today, 14 years later. I wore it proudly that day, marching with hundreds of thousands of others protesting an invasion that Saint John Paul II denounced as unjust, to heavy criticism from American Catholics at the time. Another woman for peace.

On a December night in 2005 when the state of Maryland ended the life of a man named Wesley Baker, I wore it as I wept and prayed in silent vigil with many others who are convinced that an eye for an eye leaves the whole world blind. Another woman for peace.

I wore it again in 2006 to the March for Life, where I encountered for the first time stories from women whose abortion experiences had left them scarred and isolated, a pivotal moment that formed my understanding of women’s rights. Another woman for peace.

In 2007 I wore the same button on a car trip from Chicago to Fort Benning, GA, where I joined thousands of others in remembering those murdered by soldiers trained at the School of the Americas, and in protesting for its closure. Another woman for peace.

In 2008, just two months later, I wore it again on a bus trip from South Bend to Washington DC for my second March for Life, this one attended with the man who would become my husband. This time spending most of the bus ride arguing with wealthy Notre Dame students (most of them men) about whether or not it is just to outlaw abortion without providing a robust safety net for poor single mothers. Another woman for peace.

For the last stretch of years that button has collected dust in my jewelry box, still a woman for peace, but having largely forgotten that the way to peace is justice and that work is never done.

On Saturday, I brought out my trusty little (now slightly rusty) button and attached it to my coat, pausing to remember all the places we had seen and words we had heard together. Then I climbed in my pro-life Catholic friend’s car and we stopped to pick up our other pro-life Catholic friend and we drove to the Indianapolis sister event of the Women’s March in Washington.

I did not really know what to expect. All of the kerfuffle earlier in the week about who was or who wasn’t invited was exhausting and left me scratching my head, to be honest. Since when do we as Christians only go where we are invited? What makes you think there’s any public space you don’t have the right to walk into? Imagine if Dr. King or John Lewis or Susan B. Anthony or Sojourner Truth only ever went where they were invited.

If my education has taught me anything, it’s that you always have a choice and public spaces are for everyone. The organizers of the march formally removed two anti-abortion organizations from their sponsor list. Their choice. I believe this was absolutely a squandered opportunity on their part, and I was really disappointed, but I can also see why they did it. I don’t even want to associate myself with most of the so-called “pro-life” organizations these days and I’m morally opposed to abortion. I don’t for one minute have to stop and wonder why a march organized by a group of secular feminists didn’t want to partner with a pro-life group they knew nothing about. They didn’t know that New Wave Feminists and Life Matters Journal are just as uncomfortable with tactics of the “pro-life” movement as they are, and that the common ground shared between them is more than they could imagine. Feminists marching in cat ear hats are a disgrace? But not the pro-lifers who voted for a man who brags about violating the bodily integrity and dignity of a woman? Nah. Cool story though.

These organizations took it in stride and decided to participate anyway, because there is no room, no space, you don’t have the right as woman to walk into. They know that, and so do I. So off we went, to the sister march, my little button and I.

What did we see and hear?

Women, mostly. But many men as well. People of all ages. The family we met there had a 6-month old baby with them. Women in their 80’s shuffled past us wearing ERA Yes! Buttons which had seen much more of this life than mine. People in wheelchairs with their companions. Men with small children on their shoulders. Young girls with smiling faces and light up shoes. A tall black man wearing a “Vietnam Veteran” baseball cap. Four beautiful women of color holding a large banner reading Black Lives Matter. Yes, a few reading Keep Abortion Legal or Keep Your Laws Off My Body. But also Pro-Life Against Trump and everything in between was present in this crowd of 8 thousand people.

What I heard was the impassioned speech of women who hunger and thirst for justice and who have a lot of things backwards, but a lot of things just right. Just like you and I. Women from the NAACP, and state representatives working for change. We listened to a speech entirely in Spanish from a woman who works at an immigrant welcome center. I cried along with an undocumented woman in her 20’s who still has nightmares about being brought across the desert by coyotes as a child and whose voice broke with tears as she said “I am not a drug dealer, Mr. President. I am a student a IU School of Law.” Another woman for peace.

I heard 8 thousand people sing the national anthem in front of our state house with a flag blowing in the wind and knew I was among patriots – for a patriot is not one who simply parrots “My country right or wrong!” but one who knows that holding your nation to the values of its inception is a deeply patriotic act.

I heard women my mother’s age and older speak about the humiliation of not being able to open a credit card or bank account in their own name (happened as late as 1962), not being able to study whichever subject they wished or have a doctor take their pain seriously and I realized how much there is still left to do. I raised my fist in the air as a pastor shared words that stirred my soul – “Anger may have brought you here, but the Love that holds the world together will bring you all the way home.”

And yes, I heard women speak of contraception and abortion, though these were certainly not the central focus of the event, as many would have you believe. The central focus of this event was voicing opposition to the President’s entire ethos of treatment for women, minorities, immigrants, and other vulnerable populations, as well as fear of the stripping of first amendment rights.

All present were encouraged to find a cause and get involved. To not let this be one moment in time, but the moment of our awakening to a life of action for justice. I was able to connect with SURJ (Showing Up for Racial Justice) an organization dedicated to training white allies in the work of racial justice and to connect with groups in my community working for change. I saw so much hope in this crowd, as I saw very clearly that the future of feminism is intersectional, and this intersectionality will create the much-needed space for voices that will push the largely white face of feminism to consider not only abortion, but the issues that women of color have been dealing with for, well forever.

All in all, it was very much like every social protest I have been part of. Each of these groups were made up of people who are hungry for justice, either around a particular cause or just in general. Hungry enough to disrupt the routine of their lives to exercise their most basic civil liberty of speaking freely in public.

At every march I have attended, I have profoundly disagreed with organizers or participants about something. I marched in Chicago and DC and Texas with anti-death penalty advocates who don’t believe in jails. I rallied with atheist anarchists and socialists against invading Iraq. I attended the March for Life with those lunatics in the trench coats railing about private property and was disgusted by the images of aborted children plastered on signs by some participants, their sacred bodies being again exploited. On Saturday I stood and clapped and rallied with many people with whom I profoundly disagree about abortion. However, if I only ever marched with people who think just like me, I’d be a movement of one. Or worse, I’d never leave my home, preferring the enclave of ritual purity that renders us “safe” but also incredibly fragile.

In the end, I have just as much – or if you prefer – just as little in common with a pro-choice feminist as I do with a fellow Catholic who listened to the same Gospel I did and then voted for Trump. I’d be lying if I didn’t say I understand the motives of the feminist more.

Every march, every rally I have attended has been marked by people who want peace. Peace for the people of Iraq and the Middle East. Peace for the people asked to take the life of another, and peace for the troubled soul who has taken life. Peace for the life in the womb. Peace for the lives outside of it. Peace that allows women and people of color, immigrants and the disabled to walk through the stretch of their days in safety, knowing that by virtue of their birth they have not been marked, at best with the stain of society’s indifference, at worst with a target on their back. They want to be seen, to be known, and to have their human dignity respected by the laws and practices of this nation. Anger may be what drives many to action, but look beneath surface and there is hunger for peace, the fruit of which comes only with justice.

6 thoughts on “Another Woman For Peace: Thoughts From the March”

The Keyboard is Mighty